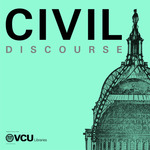 This podcast uses government documents to illuminate the workings of the American government and offer context around the effects of government agencies in your everyday life. Civil Discourse is brought to you by VCU Libraries. Opinions expressed are solely the speakers' own, and do not reflect the views or opinions of VCU, or VCU Libraries. Special thanks to the Workshop for technical assistance. Music by Isaak Hopson. Find more information at https://guides.library.vcu.edu/discourse. As always, no documents were harmed in the making of this podcast.

Aughie and Nia discuss efforts to pack the Supreme Court, and the unlikely nature of success in such efforts. Aughie gives multiple examples of the failure of Justices to act according to the party/President that nominated them for the Court.