Home > School of Education > Dept. of Educational Leadership > When the Fences Come Down > 5 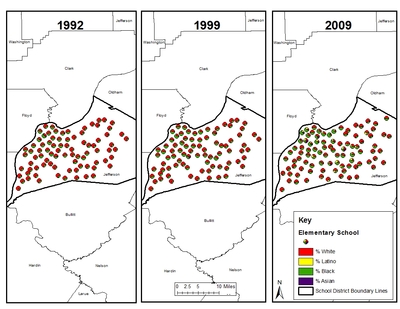 The early days of court-ordered school desegregation in the newly consolidated Louisville-Jefferson County district were stained by fear, protest, and violence. Those initial reactions gave way—in relatively short order—to voluntary and comprehensive city-suburban school desegregation. For most of the time period under study, desegregation policy in the Louisville metro called for all schools to maintain a 15–50 percent black population, centered on the overall black enrollment in the district, which remained steady at about 30 percent. During the same period, the introduction of magnet schools and a controlled choice policy brought new options to the school assignment process. Families ranked preferences among a set of schools and the district sought to honor those choices while still ensuring that all schools fell within the 15–50 percent racial guidelines. Map 5 shows how successful Louisville’s controlled choice policy has been over the years.