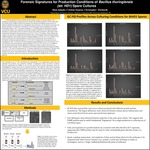 Chemical signatures that can indicate growth medium recipes or other key aspects of the production conditions are an important goal for forensic and biodefense agencies. In this study, Fatty Acid Methyl Ester (FAME) profiles were analyzed from Bacillus thuringiensis spores grown five different published medium recipes. B. thuringiensis was chosen due to its biochemical, structural, and genetic similarity to B. anthracis, a Biosafety Level III select agent and the organisms used in the Amerithrax attacks in 2001. The relative abundance of 13 different fatty acid biomarkers, spanning four structure classes, was compared across all spore samples. Differences in the types and relative abundance of specific fatty acids was observed across each medium formulation, particularly within branched-odd and anteiso structure classes (e.g.15:0 iso, 17:0 iso, 15:0 anteiso). Spore cultures also varied in the proportion of unsaturated and saturated fatty acid biomarkers. When examining specific FAME biomarkers, CAD medium showed an average abundance of 30% for 15:0 iso, whereas LD 97 and Sch media showed average abundances of 23% and 27% respectively, and G-medium and G+Peptone exhibited average abundances of 22.5% and 23% respectively for the same fatty acid. Examination of the 17:0 iso fatty acid showed higher average abundances of 12% in CAD and 13.5% in G+Peptone, while showing lower average abundances of 10%, 8.5%, and 6% in LD, G-Medium, and Sch media respectively. Further differences in fatty acid content were also noted across the sporulation media, whereby CAD, G-Medium, and G+Peptone media exhibited an average abundance of 11.8%, 11.5%, and 11% respectively for 15:0 anteiso meanwhile lower abundances of the same fatty acid were noted in LD (8.5%) and Sch (9%) media. The results indicate that determining FAME profiles can be used to discriminate between a Bacillus thuringiensis species grown in different mediums, and that the amino acid content of each medium affects the FAME profile of the species in question.